Last week I was a student in a class with local dyer, Dede Styles, at Cloth Fiber Workshop. Dede describes herself as a “heritage dyer”. She learned the craft from Mary Frances Davidson, another heritage dyer from our North Carolina mountain region, who wrote a book on the local dye plants. The Dye Pot, originally published in 1950, is still in print today.

Dede dyes mostly wool and uses only local plants that she can collect herself (with the exception of cochineal and indigo which do not grow here). Her knowledge of plants, local water sources, and seasonal growing patterns is exceptional. The dye plants she uses are very specific to this part of the country, though some are found in other areas.  They are chosen because they give good color that lasts.

She carried buckets of her own “creek water” to the workshop rather than use city water from the tap and described how she can obtain a certain color with a particular dye using water from her creek.  Water from “over the mountain” will produce a very different hue.

Dede dyes yarn in quantity, outdoors, using large stainless steel, iron, or copper pots. Her philosophy about dye amounts is to “cram as much dye plant material as possible into the pot”.  After cooking, she strains the liquid. All the yarn for a certain project must be dyed at the same time in a single dye-lot since results are not exactly repeatable. As someone who measures everything carefully and precicely, this is a refreshing approach. 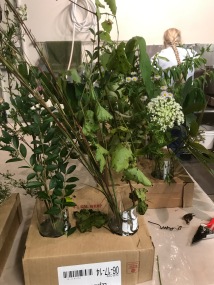 Fall is a good time to gather local plants. We observed what was growing around the weedy area near the railroad tracks, paying special attention to stands of goldenrod, sumac, and fall asters.  Dede knows a lot.  She told us that many people think they are allergic to goldenrod, but the ragweed that grows nearby is really the source of the allergens – goldenrod is only pollinated by bees, thus there is no airborne pollen! The white asters seem to produce more color than the purple fall asters, says Dede – likely because the purple asters grow in damper areas – and maybe the dyestuff is diluted. She pointed out the difference between sumac and the similar looking Goldenraintree, which contains no dye.  Some plants are biennials and thus will only be found growing in the same area on alternate years. As we walked, Dede talked about responsible gathering of plants, and the damaging use of herbicides by roadsides and railroad tracks.  Gentrification, she says, is the enemy of wild dye plants. Springtime, when the tree sap is running,  is the only time to easily gather bark from a fallen tree.  And of course, she wanted to be sure we knew the difference between Virginia creeper and poison ivy – neither one of these is a dye plant but they are often found growing together in the same vicinity as the dye plants.

Black walnut bark. Saplings are plentiful where the nuts have sprouted and need to be cut down regularly. 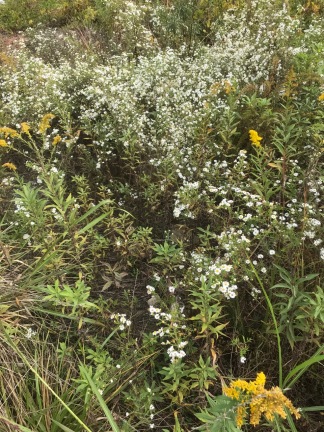 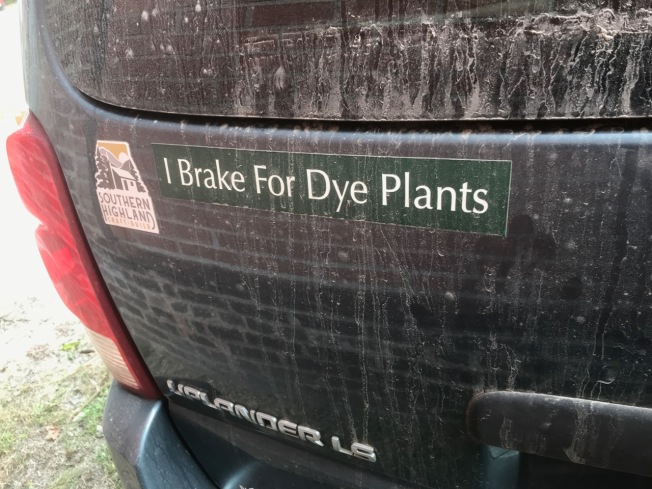 I hope that there are more “Dedes”  out there where you live  – people who know their plants from deep experience and observation and who are willing to share what they know. We owe it to ourselves to honor them and to learn from them. Dede told us that she is working on a book. It will be about the local Western North Carolina plants: where they grown, where to find them, and when to gather them responsibly.

And a follow-up to my own earlier experiments with some locally gathered dyes – flavonoids. Some of them came from my garden (coreopsis, broom, chamomile, marigold, and weld) others from “the field” (black oak bark and goldenrod) and a couple were purchased (osage and Persian Berries). I dyed mordanted silk and subjected them to lightfastness tests. The weld from the garden will continue to be my “go-to” yellow dye.