The first indigo vats that I made in the 1970’s were reduced using sodium hydrosulfite. It was the only way I then knew to reduce the indigo. A few years later I began using thiourea dioxide as the reducing agent. I was never comfortable with these vats and, as a result, I never did much indigo dyeing. The vats smelled bad and I felt that I never truly understood them.

My current, and very positive, relationship with indigo began after meeting Michel Garcia in 2008. Michel introduced me to indigo vats that are reduced with natural materials: sugars, plants, or minerals. Since then I have worked hard to learn as much as I could about these vats, and have maintained them constantly in my studio. Indigo dyeing has become an integral part of my studio work and experimentations. 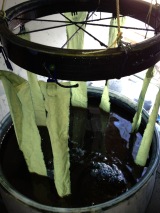 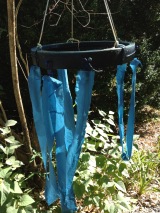 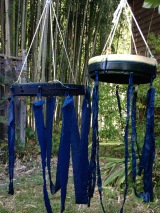 I know many dyers who use either sodium hydrosulfite (“hydro”) or thiourea dioxide (“thiox”) to reduce their vats. These chemicals work efficiently and predictably and can now understand why a dyer would make the choice to use them. But I’ve recently been asked about the safety of these reducing chemicals. This is not a question that I felt qualified to answer myself. I was with Joy Boutrup last week (we were teaching together in Iceland!) and I asked her to address this question.

Both sodium hydrosulfite and thiourea dioxide are sulfur based and will release hydrogen sulfide. This is what causes the bad smell and can affect human health when the gas is inhaled.  It can be irritating to the nose, throat, and airways and potentially paralyzing to breathing if inhaled in large quantities. Dyers with asthma should be especially cautious when using these reducing chemicals.

Both “hydro” and “thiox” also release sulfur dioxide, which is considered to be damaging to the brain. It is a chemical that has been used in photography and some photographers have suffered from long term exposure to this chemical.

When using these chemicals dyeing must be done outdoors or in a very well ventilated area! Occasional dyeing using these types of vats may not result in noticeable effects but if you stand with your head over an indigo vat day after day, then serious breathing problems could result. Joy was recently consulted by a group in Denmark, who have been using these chemical vats for many years. Some of the dyers are experiencing a variety of health problems as a result of the exposure to the chemicals. She recommended that they begin using the natural/organic vats as an alternative.

The other issue is disposal. The chemicals are very reductive and cannot just be thrown out. The reduction must be stopped before disposal but it’s not easy to keep the sulfur products from being reductive. Other chemicals can be used to stop the reduction but they are just as damaging. Some dyers simply keep their vat, adding additional indigo and reduction chemicals as necessary. Continuing to use the chemicals in the vat is preferable to uncontrolled disposal.

One another note: I have a friend who does production dyeing. She uses an indigo vat reduced with thiourea dioxide but was having trouble achieving pale blue colors. Dyers will often just do a quick 10-30 second dip in the vat to get light blues, but this doesn’t give the indigo time to penetrate the fiber. As a result, the dye is less fast to washing and crocking and is not likely to be even. I suggested that she try my approach to achieving pale blues: use only a small amount of indigo in the vat (1-2 grams per liter).

When she told me that the small amount of indigo still resulted in a deep blue color, I did some tests myself using both “thiox” and sugar as reduction agents.

I was surprised by the results. The organic sugar vat resulted in the pale blue color that I expected, while the vat reduced with the thiox was a very deep blue, although only a small amount of indigo had been use.

Conclusion: the reduction chemicals will reduce the maximum amount of indigo, making it impossible to achieve the pale colors, while in the sugar vat, only part of the indigo is reduced at a time.  This is why a sugar or other natural vat can continue to be used over many days, weeks, or months.

These reduction chemicals are used in industry and efficiently maximize the dye that can be applied to warps for blue jeans. But even industry has been concerned about the longterm effects of chemical reduction and disposal. Some industrial users have begun to use electrical reduction instead of chemicals for all vat dyes.  But artisan dyers are not industry…. The naturally reduced indigo vats are not only safer to use, but they allow us better control over our color and color mixing.