A life of natural dyeing knows no bounds. Each year I am thrilled and delighted to increase my knowledge and understanding of dyes and process.

This year, I was privileged to participate in the harvesting of indigo and the extraction of pigment on the island of Okinawa, Japan.

The Okinawa farm has been producing indigo for many years, as evidenced by the large, round concert vessels imbedded in the ground. The vessels are used for extraction of pigment.  Smaller square vessels, also in the ground, are used for the storage of the indigo paste pigment.

The indigo harvest and extraction is currently being done by a young couple, Takashi and Kitta Sawano. They have been extracting pigment here since 2012.  He is a dyer. She designs and makes beautiful, naturally dyed cotton garments in a studio located in northern Okinawa. The process of harvest and extraction requires many helping hands and there were a number of friends and artisans  who came to get their hands dirty and participate.

The variety of indigo is Strobilanthes cusia. It looks similar to polygonum tinctorium but this variety requires a hotter climate and has a greater content of indigotin. Even the stems of the plants contain indigo. Eight different harvests are made during the summer season to extract pigment from all the indigo plants.

It was pouring rain the morning we arrived to harvest. I was given a small scythe and some white ropes. I felt somewhat prepared for the cutting and tying process since this is  the same approach that we used last summer when harvesting Polygonum tinctorium at Rowland Ricketts studio/farm. Everything else about the process was different, since Rowland uses his indigo to compost the leaves for sukumo.

Rinsing the bundles of mud and debris

The goal was to collect 400 kilos of indigo plant (leaves and stems). Each bundle was weighed and the weight of the wet leaves was taken into consideration. The plants were then tossed into one of the large round vessels that was already filled with water. A porous round tarp had been placed over the surface and the plants went on top of that. The indigo plants were weighted down with wire mesh, boards and rocks to ensure full immersion.  The plants were left to soak for the next 24 hours. 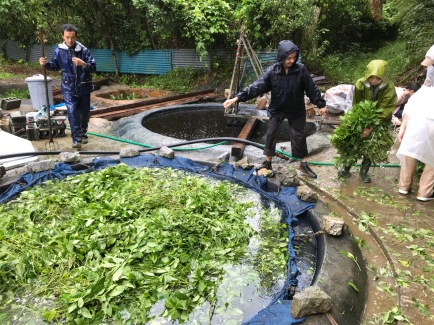 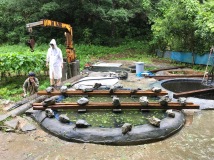 Wire mesh was added to insure full and even immersion

Every last leaf is valuable

On the next day, we observed that some fermentation was beginning and measured the pH. 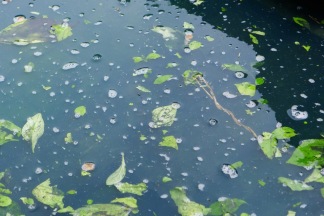 On the the third day, the fermentation was very active. The plant material was lifted out of the vessel (with the help of a small tractor).  Lime was added. The amount of lime was carefully calculated as too much lime will result in an inferior pigment.  The indigo extraction was aerated for 45 minutes using long rods with a small paddle affixed to the end. The shape of the vessel made this a very efficient operation.

Active fermentation on the third day 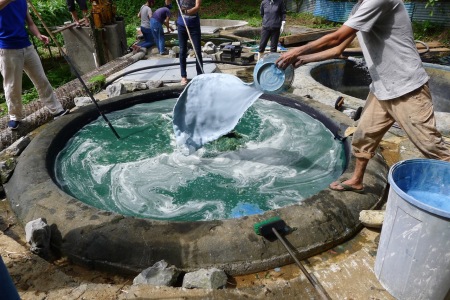 The introduction of oxygen through aeration caused the indigo pigment to precipitate to the bottom of the vessel. Once the excess water was pumped off the surface, the paste pigment could be pumped into a storage container, where a more concentrated pigment will settle to the bottom over the next few weeks.

Pumping off the surface water 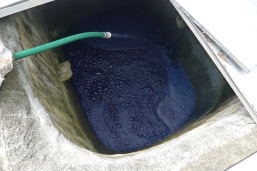 Pumping pigment into the storage tank

Removing every last bit of pigment 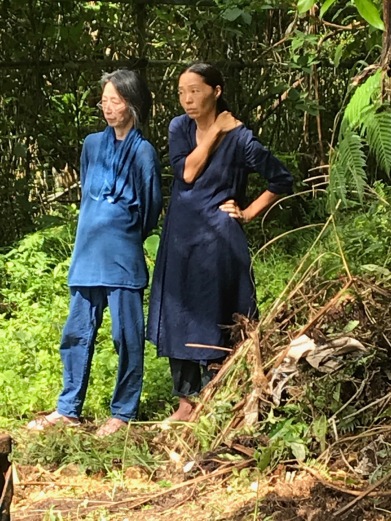 Hisako Sumi and Kitta Sawano, both dressed in indigo

I purchase  indigo for use in my own dye vats. Most of it has come from India but I am currently using indigo grown right here in the U.S. at Stoney Creek Colors.  This experience has given me a new appreciation and understanding of the cycle “grow, extract, dye” and a deep respect for those who participate in the entire process.  My thanks go to Hisako SUMI, who has participated in this indigo harvest for the last number of years and invited me to attend –  in the spirit of understanding and sharing.

24 thoughts on “Indigo Harvest in Okinawa”